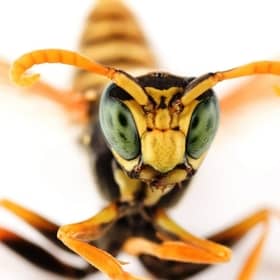 Walking Into A Wasp Nest … How 12 Stings Inspired Change

When was the last time you entered a treacherous situation and walked away feeling grateful and inspired?

Recently I took a day trek with a hiking buddy, on a forested mountaintop trail.

I was following behind and a bee started to buzz around me. I’m not easily alarmed by bees or wasps. They have to hover around me for a while, or get aggressive before I feel the need to swipe them away.

So the bee is buzzing around me investigating, and to all appearances, trying to meet my eye as though it’s intentionally testing my will. Meanwhile, I’m taking stock of the warrior-like bravery of this determined little being with growing trepidation.

This continued for three or four minutes. I start wondering, what’s this about? It struck me as highly unusual since it was my third encounter like this in as many weeks.

Usually, I just walk through their location, they buzz around a little bit and then go on their way. I hadn’t changed lotions or other products, so that wouldn’t be the reason for its interest.

My friend is walking in front of me, merrily chatting away… and makes a broad gesture with his hand. He’s wearing a lapis lazuli bracelet. It’s a series of strung beads polished from stone, so has a little oomph to it.

The bracelet propelled off his wrist, clunking loudly off a tree trunk into the brush. We stopped to look for it and I forgot all about the bee.

I located the bracelet and stepped in to pick it up.

Suddenly I felt a series of intense stings piercing all over my ankle in rapid succession. I’d stepped on a wasp nest. Although I don’t know for sure, I think I was stung around 12 times around my ankle in the span of a second. As I stepped back off the pain  receded into the background.

My friend came over, carefully reaching around the buzzing wasps to retrieve his bracelet with a steady hand.

We tramped on our way, stopping to rest and munch on snacks when we reached the next lake. He observed I had a lot of little red slightly inflamed bumps all around my ankle, but not much general swelling.

Oddly, I’d forgotten all about it by then. I became aware of some residual stinging as we talked about it, but that was it.

Arriving home I posted the event to my social media profile.

Though I was anticipating engagement, I wasn’t expecting to elicit concern from the people in my community. I was surprised the next day to see just about everyone that responded- sharing tears and hug emoji’s.

I was taken aback by the tone of their responses, surprised and a little embarrassed for unnecessarily alarming them. As though I’d cried ‘wolf’ for no reason.

A few people shared horrifying experiences. Their own and that of friends and family, which were far more dramatic than mine. They asked; “OMG! Are you OK? How did you get down the mountain? That’s horrible… It happened to me! My sister almost died from 2 stings” etcetera.

One friendly acquaintance even came by my wellness center the next day to see for herself, concerned I may be minimizing the situation.

Within that thread, a few peers made other comments. Devi Swan, a wisdom keeper in my community, recommended a plantain poultice. She then wrote; when bee medicine enters your life, watch for inspiration.

Another wisdom keeper, Kyra Lober and I lightheartedly bantered about cosmic acupuncture.

I appreciated that input because I’d been thinking along the same lines. Opening to the synchronicity and observing with curiosity, mindful not to limit myself with jargon or hasty conclusions.

That night I woke in the wee hours to the sensation of cool fresh energy running through my ankles and toes.  I could feel energy pouring through the meridians in that hip and leg from a compressed disc in my lower lumbar (acquired through an old ski injury) all the way down through my toe tips.

As I pondered the possibility of the wasps being messengers of inspiration, an old concept I’ve wanted to express came to mind.

It’s a series of articles I’ve been meaning to create titled: “12 Myth Busters to Empower the Neutered Yogi”.

Whatever the cosmic intention, that’s how my body and my brain chose to integrate the experience. I felt happy, inspired, and drifted back to sleep.

The Power of Choice

Our character and ego are products of our environment.

They are formed by how we interpret our experiences, abilities, objectives and place in society.

Different from our true self, which is informed from within, from our essence… our character is a mutation of our true self that adapts with the passage of time and environmental changes, including socioeconomic factors.

As humans, we understand the world through our stories. We often get bogged down and limit ourselves with these stories. Especially if we feel powerless to change them.

We confuse our character and true self, until we awaken to the difference. Unfortunately for most people, not until they approach death.

If you want the true power of choice, you can’t simply study the difference. You have to tap into true self… through self connection

True self is creative, whereas ego is reactive. Like any yin-yang convergence, Each operates as a paradox. The two isometrically interact counterintuitively to the other.

They come into balance when they have equal play and clear roles.

One of many differences between ego and true self is that our true self doesn’t need to be right or wrong. Our true self just wants to grow our soul and express itself in a valuable way while we have our body and life.

In this case it doesn’t matter whether the wasps were agents of cosmic acupuncture. Nor whether they intentionally selected me to inject with inspiration juice (unlikely since I damaged their nest).

By liberating myself from the question of being right or wrong, I could harness the energy to serve my purpose, enjoy the symbiotic interplay between my brain and environment… and have a little fun doing it.

When we let go of our hold on being right or wrong. We can free ourselves to be a bit playful and experiment with the mysteries of our mind and the universe, and learn to make more conscious choices.

Choosing how to use our mind in any situation. Conscious choices propel us towards freedom.

Responsibility Is The Root of Freedom

Freedom: “The power or right to act, speak, or think as one wants without hindrance or restraint.”

Freedom comes from claiming the ability to choose our information. Not limiting ourselves within the confines of the ego or societal norms.

Freedom of choice is not frameless however. It needs integrity to stand tall and claim itself.

Freedom is an art form. It’s tempered like a fine sword. Flexible and strong. It comes from discipline and deciding to take responsibility for our information, behavior and quality of life.

I’ve been feeling I need to make a shift to share more about myself and my journey and how I practice as a practitioner.

Although I’ve been training influencers through my programs and systems for close to 20 years, I have this rich, inner, mystical life that I don’t share often.

It’s created a gap in communication as I shift my business online. It’s also somewhat isolating, keeping it to myself. See: The Tao Of The Mountain… How To Harness GREAT Energy

Deciding to explore “bee medicine” inspired me to choose a starting point and deliver this message.

There are 3 forms of information

The most direct form of information is experiential when it comes to changing our behavior and developing high performance success habits.

That’s why in the Tao Healing Arts we use the body to train the brain, and we use the brain to train the body. It’s mind over matter training. Qi energy forms the bridge of communication that carries information between the two in a symbiotic relationship.

The more dynamically Qi-energy flows between your brain and body… The greater your ability to manage your information and therefore, manage your energy ( in business and life).

As you cultivate the ability to harness your energy and direct it well, you empower your ability to leverage your impact with less effort.

It builds from self connection in an interplay with the environment, which provides feedback.

As you develop the ability to oversee the process objectively, without prejudice you observe the outcome.

Before long you’re moving with an economy of motion. Doubling your impact with less effort. Harnessing the energy of the cosmos for maximized results.

So, stay tuned. I’m going to start sharing my “12 Myth Busters to Empower the Neutered Yogi”. If you haven’t already, click the button to subscribe. 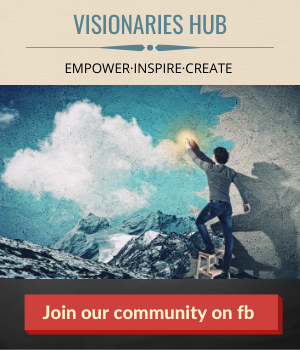 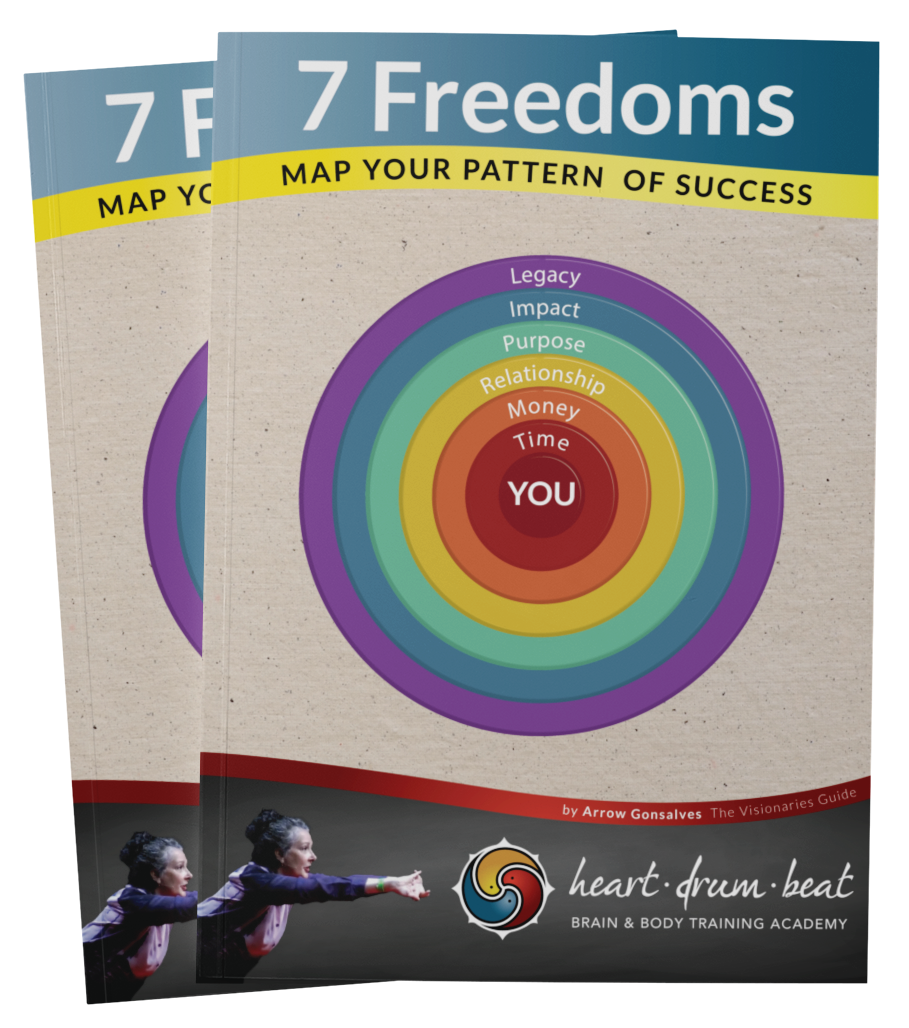 7 Freedoms – Map Your Pattern Of Success